I haven’t done one of these in a few years, but I thought I’d put together a small holiday buying guide for SF lovers – at least some of the items I think readers of this site would like…

To start, I cannot say enough about Ashley Eckstein’s Her Universe – except that I am jealous as the merchandise is for females of the species. My loss appears to be my wife and daughters gain – they love their shirts, and they might just be finding a few more delivered by Santa this year…just this week there are two new Doctor Who shirts – “Whovian” and “The Girl Who Waited”, while on the Star Wars side there are new “Cute Vader” pajamas and a Japanese-style V-neck. And the Ahsoka Tano hoodie, representing Ashley’s alter ego, is now available in adult sizes due to demand.


Star Trek and Battlestar Galactica fans aren’t left out with a new Gorn t-shirt and “Live Long And Prosper” earrings, and a new crew neck sweatshirt bearing the BSG75 logo.

Some of the Her Universe items are also available at Hot Topic (both online and in stores), where the guys can find a few items for themselves as well.

For some who read the site, the holidays mean Doctor Who and the Christmas special on Christmas Day – but how about after opening your presents Christmas morning, you pop in the [sfs=1259]Doctor Who Series 7 Part 1[/sfs] Blu-ray and recap the season leading up to the special and his new companion? ([sfs=1260]DVD[/sfs] also available)

In a different vein, lets talk about games – getting games was always my favorite part of Christmas. And there are lots and lots of games out there now that deserve more exposure. 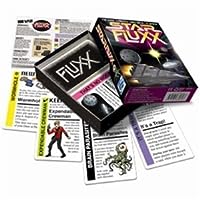 [/asin]I just recently picked up [asin=1936112191]Star Fluxx[/asin], which is a simple but sometimes maddening card game that just happened to be featured on Geek & Sundry’s Tabletop the same week I purchased it. Star Fluxx is one of the Fluxx games, which all have the same basic rules but different themes to the cards. In Star Fluxx, the cards all have SF themes, many of which you KNOW are referring to well known SF properties, but does not name them by name for obvious reasons.

In Star Fluxx (as with all Fluxx games), the rules start out simple. You can draw one card and play one card on your turn. But there are cards that change the rules, like “Draw 3” and “Play 4”, Goal cards (cards that determine the winning condition), and Keepers – cards that you possess in order to reach a goal, such as the “Expendable Crewman” and “Time Traveler”. Since the rules and the Goal can change, winning can be elusive…

Another hot game I’m looking forward to getting a group together to play is [asin=B000W7JWUA]Settlers of Catan[/asin]. Players explore and settle areas on a map and gather resources, and can bargain with other players for resources they need. The basic game is for 3 or 4 players, but an [asin=B000W7JWYG]expansion allows for 5-6 players[/asin]. And if you’ve played it enough and want a new challenge, there are plenty of themed expansions – from [asin=B000W7G78A]Seafarers[/asin] to [asin=B000W7I7EW]Cities and Knights[/asin] and more, and multiple expansions can be used in a single game! 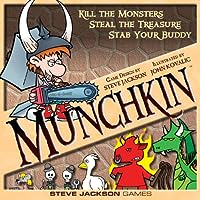 [/asin]Another game I learned from Tabletop is [asin=B004U7JJWE]Munchkin[/asin] from Steve Jackson Games. It’s like Dungeons & Dragons turned into a card game with humor, for 2-6 players. Players kick down doors and attempt to defeat the creatures on the other side, and the other players can help – or hurt, and even steal their treasures. And to add more variety, card expansions like [asin=B003S9W4AO]Unnatural Axe[/asin], [asin=B003S9W4AY]Clerical Errors[/asin], and new themed versions like [asin=1556346638]Star Munchkin[/asin] and [asin=B004QGY0LE]Munchkin Zombies[/asin] (where the players are zombies and the “monsters” are people to eat) make for a fun, demented time. If you are fan of The Guild, there is also [asin=B007EZLPDU]The Guild Expansion[/asin]. And for the holidays, check out these three expansion packs: [asin=B00606SEJW]Reindeer Games[/asin], [asin=B004BKUPMS]Santa’s Revenge[/asin] and [asin=B00A4E72QM]Naughty & Nice[/asin]!

I hope everyone enjoys the holidays!