On Friday’s episode, “The Diamond of the Day, Part 1”, Morgana and Mordred prepare to destroy Camelot, while Morgana plots to destroy Emrys. Is Merlin Camelot’s last hope? Find out Friday at 10/9c on Syfy. And also check out star Colin Morgan’s recap of last week’s episode!

But don’t forget – you can enter to win a Merlin prize pack, including:

Best part – you don’t have to fill out any forms, give any personal information, or anything like that – you just need to tweet! Retweet this sneak peek, or tweet a link to this page with the tags @scifistorm, #Syfy & #DiamondoftheDay (you need all three to be counted), OR you can tweet @scifistorm and @MerlinOfficial about last season’s finale – the one that you can win the script for! It’s as easy as that! If we get enough tweets, one of you will win the prize pack! So watch, tweet, and win! Deadline is Sunday! 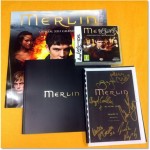 END_OF_DOCUMENT_TOKEN_TO_BE_REPLACED

Comments Off on Another new Merlin episode preview, another giveaway! :merlin more...