It’s such a bittersweet day.

Filming of the final six episodes of Warehouse 13 concluded in the early hours this morning in Toronto, in what I’m sure was a tired and emotional end.

Thanks to Eddie McClintock’s tweets, here are some pics from the final days. I don’t know what the episode is about yet, but it sure is going to be interesting… 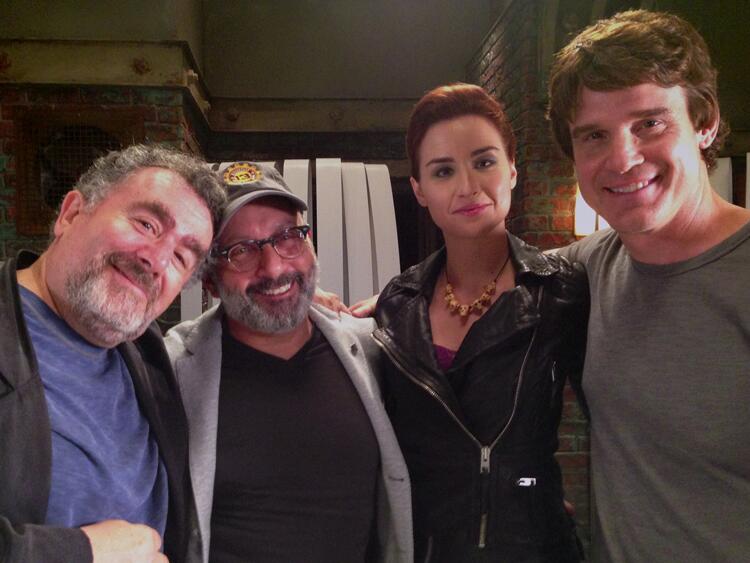 END_OF_DOCUMENT_TOKEN_TO_BE_REPLACED

HBO has given a pilot commitment to a Westworld series from J.J. Abrams, ad Robot, Jonathan Nolan, Jerry Weintraub and Warner Bros. TV. Inspired by the 1973 movie from Michael Chrichton, the series as described as “a dark odyssey about the dawn of artificial consciousness and the future of sin.” The movie, which starred Yul Brynner, Richard Benjamin and James Brolin, was about a near-future amusement park where guests could live out fantasies in various worlds, including the western-themed West World, populated by androids. However, a malfunction spreads through the system and the androids begin to kill the guests.

It was followed by a sequel, Futureworld, and a short lived series, Beyond Westworld.

In the second season finale of Continuum, Kiera hurries to save Alec from himself and preserve her chances of getting home, while Alec must choose between solving Kiera’s dilemma or his own. Tune in tonight at 10/9c on Syfy for “Second Time”!

Also check out the interview with the cast where they discuss the major theme of the season.
END_OF_DOCUMENT_TOKEN_TO_BE_REPLACED

Marvel announced today that actor James Spader (Boston Legal, Stargate) will take on the role of Ultron in the upcoming Avengers: Age of Ultron movie to be directed by Joss Whedon and expected to be released on May 1st, 2015.

Spader, who’s most recent feature credit was as W. N. Bilbo in Lincoln, has a lot of television experience as well – he has three Emmys for his role as Alan Shore in The Practice and Boston Legal, recurred on The Office and is starring in the upcoming NBC series The Blacklist.

Ultron is a robotic supervillain with an adamantium shell, making him nearly indestructible, and an Oedipus complex. In the overall Marvel universe, he was created by Hank Pym (Ant-Man) by duplicating his own brain waves, resulting in an unstable robotic intelligence, obsessed with constant upgrading.

Comments Off on James Spader to play title villain in Avengers: Age of Ultron :avengers more...

Haven returns for its fourth season on Syfy September 13th – 10 days after Season 3 releases on [sfs=1361]Blu-ray[/sfs] and [sfs=1362]DVD[/sfs]. And Season 3 purchasers will receive an extra bonus – a 16-page graphic novel called Haven: After The Storm, which fills in some of what happens after the Season 3 finale and the Season 4 premiere, which picks up 6 months later. The comic was limited to 100,000 copies.

And here’s a teaser for Season 4, along with some interesting found footage from a group called the Darkside Seekers…looks like there is going to be more Trouble…and don’t forget, Eureka‘s Colin Ferguson joins the cast!

Syfy released their fall programming lineup today. Not much on the scripted drama side beyond Haven, as most of that will return next year, but some returning and new unscripted programming and feature movies.

Returns Wednesday, September 4 at 10PM – In Season 2, the hardened team of gold miners and paranormal investigators return to Eastern Oregon’s notoriously haunted Crescent Mine to continue their quest for gold and evidence of ghosts. The investigators and miners delve further into the mine’s mysterious history revealing new information about the recurring Masonic symbols, Native American presence and the spirit of “Joe,” all while battling the elements in hopes of striking it rich. This season, they’ve revamped the popular Remote Investigator of Paranormal Activity (RIPA) and brought in a surprise new addition to the team. The Season 2 premiere will be preceded by the 9PM one-hour special, Ghost Mine: Back on the Mountain, hosted by Adam Copeland (Haven), in which the miners and investigators gather ‘round the campfire to reminisce about the highs and lows of last season.

Premieres Thursday, September 5 at 9PM – Contaminated moonshine dumped in a Louisiana swamp turns the bayou’s gators (and the people who eat them) into deadly mutants. The movie stars Victor Webster (Continuum) and Jordan Hinson (Eureka).

12 Monkeys gets pilot order from Syfy

Syfy is greenlighting 12 Monkeys, a drama series based on the 1995 Universal Pictures film directed by Terry Gilliam, to pilot. The 60-minute cast-contingent pilot is being produced by Universal Cable Productions and Atlas Entertainment, producer of the original Bruce Willis-Brad Pitt theatrical.

Based on the classic hit film, 12 Monkeys follows the journey of a time traveler from the post-apocalyptic future who appears in present day on a mission to locate and eradicate the source of a deadly plague that will eventually decimate the human race.

Comments Off on 12 Monkeys gets pilot order from Syfy :12 monkeys more...

One more has been added to the roster for the Syfy pilot High Moon, in the form of Jonathan Tucker (Parenthood) in a recurring role.

Jonathan Tucker will portray Stanslav “Stan” Stavin, a handsome and outgoing miner for the Russians. But there is more than meets the eye when it comes to this man.

Originally from Boston, MA, Tucker is known for his roles in films The Texas Chainsaw Massacre, Hostage, In the Valley of Elah and The Ruins, as well as the NBC series The Black Donnellys. He also portrayed emerging artist Patrick Angus in the 2009 film An Englishman in New York opposite John Hurt.

Charity Wakefield (Mockingbird Lane) also signs on to the pilot for a guest starring role, portraying the smart and savvy Eve St. John-Smythe. Eve is British and has a rakish confidence that comes from being unfathomably rich. She is CEO of the world’s most profitable corporation and is responsible for opening up the moon by providing oxygen to the various countries there. This vision speaks to her fair-mindedness, but controlling who breathes and for what price is also a spigot the cunning businesswoman is happy to adjust to get what she wants. Her political posturing comes from her idealism, and ultimately what she wants is to make good on her family mission to make the moon accessible to everyone on earth.

Born in Sussex, England, Wakefield starred in the BBC1 productions of Rapunzel and Casualty 1907. She has extensive theater credits on the British stage including Constance in The Three Musketeers at the Bristol Old Vic, Elaine in The Graduate at the New Vic, and Susan in Baby with the Bathwater at the Old Red Lion Theatre. In 2008 she toured in a revival of W. Somerset Maugham’s The Circle at the Chichester Festival Theatre.

On Friday’s Continuum, Kiera and Carlos must stop Travis after he gets his hands on Elena’s CPS suit. Watch “Second Last” Friday at 10/9c on Syfy.
END_OF_DOCUMENT_TOKEN_TO_BE_REPLACED

I’m just learning of reports that the remake of the classic British SF series Blake’s 7 from Georgiaville Television, which I’ve been asking for years, is no longer in development at Syfy, but may be nearing a series order from Microsoft, of all companies, to become one of the first original series offered over the Xbox Live service.

Xbox Live may also get the Halo series long in development at Steven Spielberg’s Amblin TV.