I know it is late in the shopping season – I’ve been uber-busy this year, but you might still have time…here are a few of the things we like out there…most of which we’ve purchased!

With three science-fiction-loving girls in my house, there was never much in the way of appropriate clothing you could get for them for gifts…until about four years ago. Today, their wardrobes and my wallet seem to be aimed at Her Universe, founded by an actual Jedi – the voice of Ahsoka Tano, Ashley Eckstein. Covering not just Star Wars, but Doctor Who, The Walking Dead, Star Trek, and Syfy programs, clothing and other merchandise specially made for women with awesome designs abound. And you can also get items at ThinkGeek and Hot Topic (in the stores as well!) Still no merchandise for men…yet.

For the men at least, if you are a fan of Warehouse 13, did you know that star Eddie McClintock, who plays Agent Pete Lattimer, is an artist? For the last few seasons he’s designed and sold T-shirts for the show, and the final season T-shirt is not only available for sale, but you can GET IT SIGNED BY HIM for free! It may be too late for Christmas, but who doesn’t like an extra gift after the holidays? And while you are at it, check out his original artwork for sale.

Speaking of ThinkGeek – I’m not a coffee drinker, but I do like a hot cup of tea, and I can be a bit of a tea snob. More recently I’ve delved into the realm of loose leaf teas, but they can be difficult to use – I’ve got two of those round mesh tea infusers (including a Mickey head one I picked up at WDW), but if you’re dealing with fine cut tea, they never really seem to close properly and you get pieces of tea in your drink. But then I found this TARDIS tea infuser, which looks perfect. I haven’t tried it yet because it’s a Christmas gift to myself, but the design looks to be just what I want – fill from the top, fine holes on the bottom…problem solved.


Of course, what list would be complete without some DVDs/Blu-rays? The Hobbit: The Desolation of Smaug is out now, but weather has blocked me so far from seeing it, so I have to console myself with another viewing [sfs=1373]An Unexpected Journey[/sfs].

Of course, out just this last week is the 50th Anniversary special episode of Doctor Who, [sfs=1371]”The Day of the Doctor”[/sfs], in which almost everything we knew about the Doctor since the show was revived is off by one. Or, at least by one – it’s just a week until “The Time of the Doctor”!

We’ve still got 4 months until the return of Defiance, but [sfs=1363]Season 1[/sfs] is available now for a review before the new season!

Ooooh, games! Geek & Sundry‘s TableTop with Wil Wheaton has gotten me back into games again, and I’ve picked up several games featured – and even had a few beforehand. Some of my favorites are: 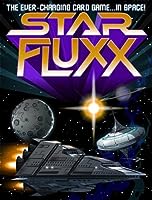 [asin=1936112191]Star Fluxx[/asin] – A wacky card game where the rules constantly change and anyone can win at any time, with a science fiction theme. Cards combine for various in-joked from your favorite sci-fi films and shows…” Got the Moon and Space Station cards? Well, “That’s no moon…” And there are other themed sets as well, like [asin=B00699J8O0]Monty Python[/asin] and [asin=1929780664]Zombie Fluxx[/asin].

[asin=B008MWWEJI]Star Trek Catan[/asin] – A Star Trek themed variant of [asin=B000W7JWUA]Settlers of Catan[/asin], the popular strategy board game, with special features like character cards that give you special abilities in the game.

[asin=B004U7JJWE]Munchkin[/asin] – The “anti-role-playing game” with seriously twisted humor from Steve Jackson games. Try to get to Level 10 by bashing down doors and facing what’s behind them, while getting help from your “friends” – or stabbed in the back. It’s a co-op game, but only one can win…and there are plenty of expansions available to keep it interesting, including a [asin=B00606SEJW]holiday-themed Reindeer Games expansion[/asin], and variants like a version based on the web series [asin=B007EZLPDU]The Guild[/asin]

That’s about it for now…but if I think of more I’ll let you know!

:defiance, doctor who, her universe, warehouse 13