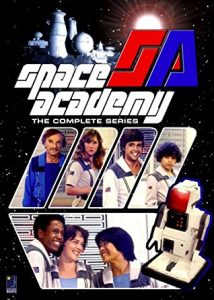 Back in the days where you had just a handful of channels and had to adjust antennas to point in the right direction depending on the weather, Saturday mornings were the domain of kids programming. Primarily cartoons, occasionally there would be a live action show as well. In the cartoon universe, there were the major players like Hanna-Barbera and Warner Bros, there was also Filmation, who was firmly entrenched in Saturday morning programming since the 60s, working on early DC Comics shows featuring Superman and Batman as well as the Archie comics. In 1973, they produced Star Trek: The Animated Series. By the mid 70s they had quite a few cartoons in heavy rotation…but then they decided to break out into live action shows. Shazam! (which is being developed for a feature film) and The Secrets of Isis, but the two I remember most were Ark II and Space Academy, being the science fiction-crazed kid I was. Both shows only lasted 15 shows, but they were repeated often and I would watch any chance I could get. Both were released on DVD in 2006. Neither are currently in production, but you might be able to pick them up from resellers. Check out [sfs=698]Amazon[/sfs].